There are a lot of things writers do, and probably are unaware of the fact they're doing it. And the worse part is, it makes readers HATE you.

Don't force a situation in order to justify something that's already happened but before had no true reason for it. Readers pick up on this and aren't fooled by the patched up work you did.

Don't force dialogue in order to create a situation. Again, Readers pick up on this and they're not happy with you.

Don't force tension in order to create conflict. Forcing it, will give you a flat reaction. It will make the Reader actually stop reading your book. Create tension yes, but not in ways where it's unbelievable because it's SO predictable.


When I read something I want to feel emotion, (all kinds- pain, happiness, the butterflies, I want my heart to break when the MC's losing someone) I want to Love and Hate a person, (Like Snape in Harry Potter- Totally hated him as much as Harry did from book one to book six, Seven I was like Awww, why? then I liked Snape) Please show me a reason to care, and last give me some real conflict, tension, where I'm so drawn in I can't possibly pull out because it's actually in my head now.


What do you want when reading a story?
Posted by Natalie Decker at 5:12 PM 3 comments:

CONGRATS TO THE WINNERS

Thanks for all that entered.

Please Email me at Rozam0711@gmail.com tell me what kind of e-reader you have. Nook or Kindle.

From me to you

I love this song.


Happy Listening.
Posted by Natalie Decker at 6:12 AM 2 comments: 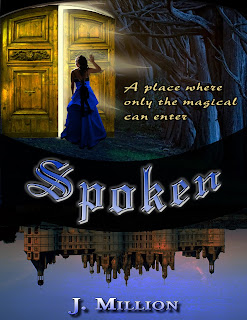 A little bit about Spoken:


Princess Calla Everfield has many secrets: a secret crush on the servant Greyson, having no desire to marry Prince Devon, but her biggest secret is the magic she does in the west tower with her governess, Lady Destiny. Magic is forbidden in the land of Hillshire, and princess or not if Calla is caught tangled up with such evil, her punishment will be death. When Greyson threatens her life, she thinks he's discovered her secrets.

Greyson has always followed orders. Even the ones he's questioned like his father sending him to the mortals world to befriend a princess. And then being told if such a time comes when Lady Destiny tries to strip the princess of her powers, he must kill the princess. When the plan to kill Calla fails he decides to whisk her away to his magical kingdom, Spalden. And now, he finds himself going against his father's wishes again when he falls for Calla, instead of Isadora the intended bride he's to marry.

While Calla learns how to hone her power, Lady Destiny begins to steal dark energy and eventually lures the princess back to Hillshire. In order for Calla to save herself and everyone she cares about from Lady Destiny's wrath, she must make a choice. If she gives up her magic she'll never see Greyson again since her father has a bounty out on him. However keeping the magic means she'll have to kill her mentor, and leave her family behind forever, since magic isn't accepted in her world.

TEASER for SPOKEN is here.


Since this is my Book Birthday, I going to giveaway four copies of Spoken away.

If you want a copy, Place a comment below about one of your favorite things in a story? 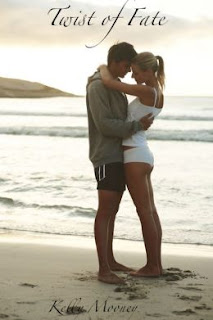 My dear friend and awesome CP Kelly Mooney just released her fourth novel called Twist Of Fate. I read this version from it's beginning stages and then the revised one. It's a really cute story.

Ben Hart doesn’t do love. He’d been there, done that. The two times he’d chanced it, they’d both broken his heart. He has everything a Junior studying at The University of Arizona could want; a great fraternity house to live in, his best friend as a roommate, and more girls then he knows what to do with. Life is good. Even perfect at times, until the one girl from his past, walks back into this life, changing everything.


Paige Pearce has one goal - to get as far away from her old college as possible, desperate to forget the one night that should never have happened. Attending school with her older cousin Tommy 3,000 miles away, seems like the safest place to begin a new life. However she doesn’t bank on being drawn to the one boy she left behind years ago, and who just might be able to help save her, if she’ll let him.

This is a new adult book. Intended for audiences 17+

Contest Info:
Readers can enter during the entire month of February.  A winner will be chosen each day this month! Whether you are taking a picture of yourself in wings, drawing wings, or creating wings digitally, you can submit your photo or video to mnbcontests@gmail.com.  You can enter in a few additional ways in the Rafflecopter widget below, to increase your chances of winning. With a total of 28 winners, your chances of winning are great!

Tweet Idea:
Show Us Your Wings & #WIN a copy of A Shimmer of Angels, by @LisaMBasso, from @Month9Books! 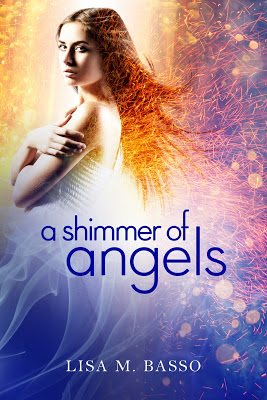 About A SHIMMER OF ANGELS
Sixteen-year-old Rayna sees angels, and has the medication and weekly therapy sessions to prove it. Now, in remission, Rayna starts fresh at a new school, lands a new job, and desperately tries for normalcy. She ignores signs that she may be slipping into the world she has tried so hard to climb out of. But these days, it’s more than just hallucinations that keep Rayna up at night. Students are dying, and she may be the only one who can stop it. Can she keep her job, her sanity, and her friends from dying at the hands of angels she can’t admit to seeing?

Posted by Natalie Decker at 7:57 AM No comments: