Things you Probably Shouldn't Do

This is not a typical Do and Don't do in the writing world. But it is a post about some things that you probably shouldn't do.

1. Do NOT show your nine yr old daughter how to gut a deer, when they love animals and have NO idea why you shoot them. (My father did this to me.) It was not fun. First I gagged, Barfed, Cried, AND ran home. From this experience I learned I will never be a doctor, because that was beyond gross. I also learned how disturbed construction workers are because my dad said "Oh suck it up."

2. Do NOT let your brother's friends play video games in your room. Because one of them might sleep walk. And while you're sleeping you might wake up to some boy in his boxers standing in front of your TV mumbling dumb stuff. (This happened to me when I was 15) I screamed, because girls my age were doing said stuff with boys and this dork was in his boxers in my room while I was still in bed.  Anywho Threw a pillow. Apparently you shouldn't wake up people that are sleep walking. That person Woke up freaking out, screaming and launched my video game controller at me. Had a bruise on my forehead for what FELT LIKE forever.

3. If your parents are teachers, and you go to their school. May I suggest you don't throw parties at their house OR attend parties at their house. Because Your Parents will tell each one of your classes about all the crazy crap they've found or came home to. Like my health teacher apparently came home and found their son passed out under the pine trees with his pants to his ankles. One shoe missing one shoe on. Apparently he thought he was in his bedroom.

4. Also, never and I mean this NEVER go to a party with your stupid step brother. If you do, make sure you take your car. Do not let him drive. The first sight of cops, I was ditched. The house I was at I never been to before. Had no idea who the people were at the party. There was a corn field surrounding this place. Some party person takes my hand and drags me into the corn field. I wasn't drinking mind you. So I wouldn't have been in trouble like most of them. I didn't know why I was in this stupid corn field. Person pulling me loses a shoe. I try to go back to find it but they start yelling at me. After cops leave I decide to find my idiot step brother. Guess what? That dork left. LEFT ME! He didn't come back. I waited thirty minutes and that jackhole drove home. When he found out I wasn't home he decided to go back to the party where he left me. But by this time I already got a ride so we made him think I got hauled off to jail. So after ten minutes of him crying and saying he was sorry I emerged and slapped him in the head.


5. Fishing is great unless you're scared of snakes. Do not go to a lake that has WATER SNAKES. I hate snakes. I'm that person screaming and running in the other direction if I see one. Anyways, I was fishing. I got a bite. YAY! I start reeling it in. There is something hissing and swimming really fast near the edge. I look at it. ITS A SNAKE. A BIG ONE. I no longer cared about what I caught Screamed! Threw my pole. and RAN! I mean jetted like there was a fire on my rear. My brother yells, "WHAT THE HELL ARE YOU DOING?" Because it's his pole I threw. It almost went into the lake. The line is Zipping out of it. Fish I guess is pulling it closer and closer to the edge. I didn't care. I was running.

6. When driving don;t flip people off. I mean hey, they might have been in the wrong and yes, they might have cut you off but these people might turn out to be your child's next teacher. "OH CRAP!" And they might say "Hey ... Don't you drive a ..." And you are like OH SCREWED.


Posted by Natalie Decker at 7:35 PM No comments:

My shoesies are super cuties

Before my typing fingers take over, Happy Father's day to those who are spawn creating, and proud to be dad's.
And now onwards to my post.
At a picnic this weekend someone said, "Oh you have the cutest shoes." Of course I thanked them and then they asked, "Where did you get them?" Now, shoes are like a woman's soul. It sounds crazy. It even sounds a little too sex in the city, but believe me it's the truth. We have a reason for buying shoes, and we might have lots of them. It doesn't matter if we have 5 different pairs of black shoes, they're all different. Some are sandals made for summer events, near a beach or lake, some are sexy heels made for a hot date or restaurant type event, point is because honestly I could type all day about this is that they're different. Anyways the particular pair of shoes I was wearing happen to be a simple leather wedge sandal that I actually had since I was 16. YES. I had these babies for a long time.

I almost killed my owner on the first day she purchased me. She argued with her grandmother who warned her that I would be a danger to her until she learned to walk in me. But, she decided to be stubborn and wore me anyways. Well, my owner decided she was going to go on to the escalator and one foot got two steps in front of the other. She could have easily saved herself if she would have parted with one of me, but she was stubborn and didn't and as we were coming to the top she finally balanced herself out and everything was okay, but it was literally touch and go there.

The next time she decided to wear me, we were on the stairs at her High School. Guy she had the biggest sappiest crush on was a few steps in front of her. I decided to help her make her love connection by leaving her foot at the exact moment Lover boy stops on his landing to the floor he was about to get on, and Boom, hit him right on his nice behind. mmm hmmm that's right. Right in his bottom. he turned and my owner dodge him and my awesome attempt to make a connection, sneaked around some people snatched her shoe away before prince charming could see miss cinderella lost me, and then she ran down the hall. Oy. Never ever did that again.

Another time she wore was on this date with the boy who she thought was cute, and liked, but wasn't all thump thump in love with. But she wanted to be polite and agree to one date. It wouldn't hurt. Besides she could have been wrong and there could have been that OMG dreamy connection. Eh. I was stuck to a floor in the back of a movie theater. WHO SUGGESTS A SEAT IN THE VERY BACK ROW ON A FIRSt DATE?!!! I was telling my homegirl to run. I'd support her. He was clearly bad news. Anyways we're sitting there, and all the sudden my owner is feeling uncomfortable because her date is getting way too close. so she shifts, but I'm stuck to something. It's gooy and stringy. And EWWWWW it's Gum. Someone's nasty sticky mouth germs are on the bottom of me! Date is still trying to make the moves on my owner who isn't having it so she actually takes me and wipes my ickyness off on her dates pants. Yup. He's Not calling her again!

My shoes and I have been through a lot. This is only the first couple years I owned them. There are many stories to tell.

What kind of stories can your shoes, watches, or even clothes tell?
Posted by Natalie Decker at 8:28 PM 1 comment:

I think there are Crazy people, Insane people, and then there is just hyper. Now, let me be clear there is a difference in all types. Crazy and Insane you'd think went hand and hand but no they don't. Let me explain. Crazy people, are just Funny, unfiltered little people who will say what they think at that very moment. Sometimes it comes off a little "OH MY GOSH." And sometimes it comes off a little, "WHAT A B....." Point is it has no filter and it's truth without walls.

Insane people are stalker I want to murder you in your sleep kind of crazy. Those people FREAK ME OUT! Seriously if someone comes up to me and says "Oh holy shit I know you" and then gets that creepy psycho laugh and bounce that follows, yeah I'm totally running. I don't really like those kinds of people.

Now, people who are Hyper, all over the place has that enthusiastic hand shake yes, I can handle them but only for so long. Because the hyper phase kind of annoys me. Just like fake plastic people.

But all this got me thinking about characters. What makes you like a character? Is it the wit? Charm? Or is it the gritty truth? Can a character come off as Fake back stabbing Tw...at or is it more like innocent doll. Personally I love characters with bite, flare, and above all this moving way to really tell the world to Piss off and just be who they are. Take it or leave it kind of attitude. I love that. 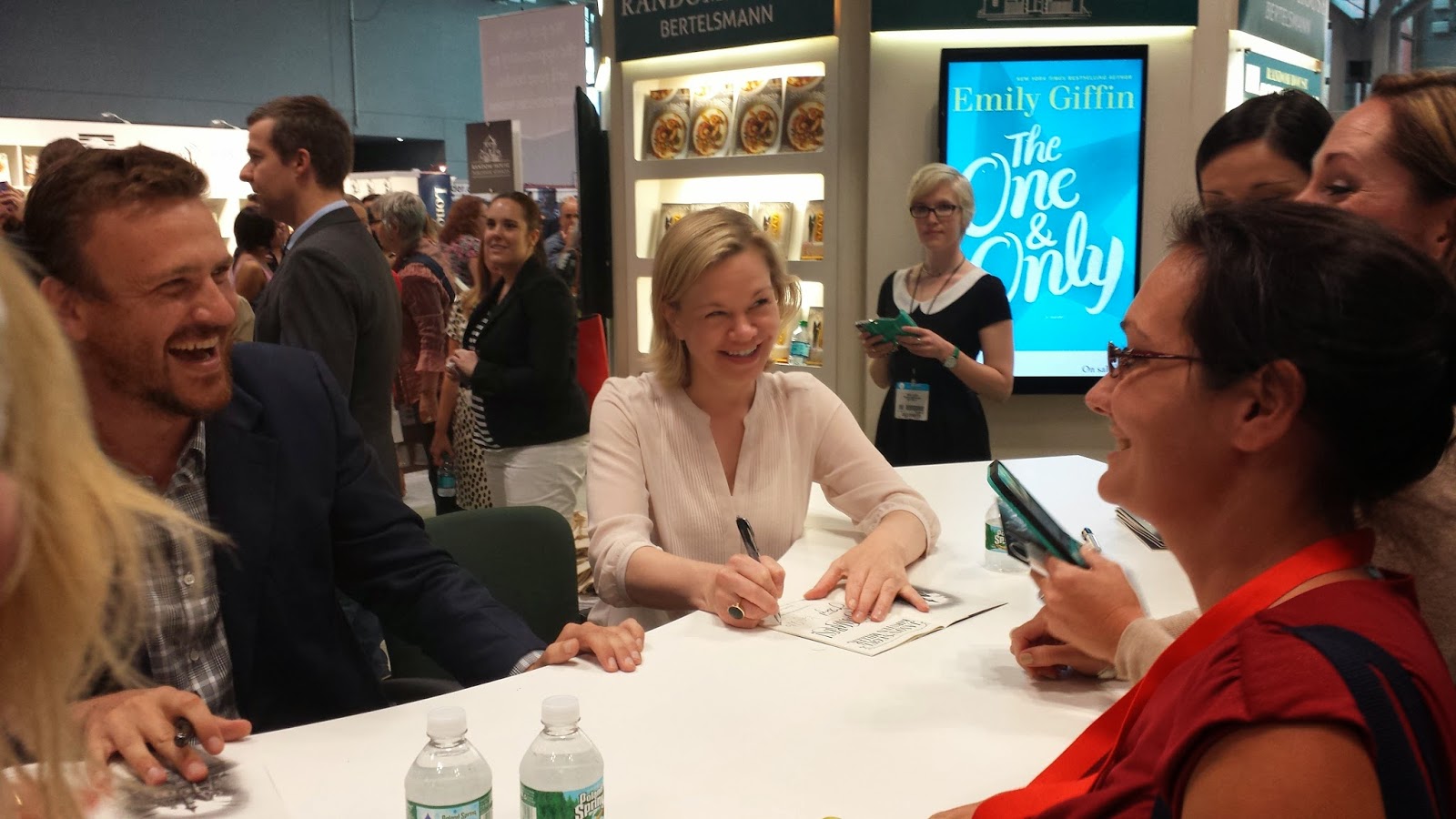 But here is one of my Awesome accomplishments at BEA! Yes, That's Jason Segel! AH!!!!
Posted by Natalie Decker at 1:58 PM No comments: