It's here! It's here! I am so excited about this. I've been waiting for what feels like eternity to show you all my totally awesome cover, and here it is. Also, because you guys are so fantastic here is a snippet of Rival Love set to release August 26th, 2014. 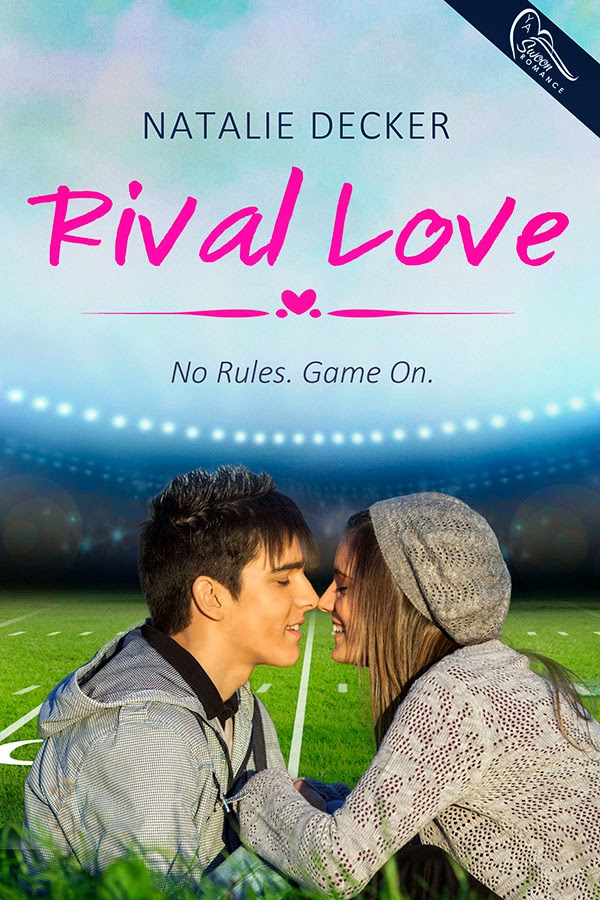 Skylar Fletcher is a proud Harris Academy Bulldog! She has everything she’s ever wanted: a perfect boyfriend, great friends, and her dream college waiting for her in the fall. But nothing lasts forever. Skylar's world shatters when her mom decides it is time to move and drags Skylar, kicking and screaming, into Bobcat territory.
At Delmont High School, home of the Bobcats, Skylar has no friends and is often bullied. To make matters worse, her home life sucks thanks to all-star quarterback Caleb Morgan, nephew of her mom's live-in boyfriend.
At first Skylar and Caleb want nothing to do with one another. But they soon discover they're not that different after all--and each is harboring a secret attraction to the other. But can a Bulldog and a Bobcat ever really be more than friends? And are Skylar and Caleb willing to risk everything to find out?

God, I hope no one sees me. Exhaling for what feels like the umpteenth time since we pulled up to Brian Timmons’s house, I quickly glance left then right. Perspiration beads on my forehead and at the nape of my neck as I open the door to my mother’s Honda Accord. She waits for me to bound up to the porch like an obedient child, but there are some things that demand stubbornness. This just happens to be one of them.
Out of all the ridiculous and inexcusable things for her to do to me, she did the absolute worst. She moved us to Bob–freaking–cat territory! Um, hello, I’m a Harris Academy Bulldog and super proud of it! These veins bleed orange and black. Not brown and yellow—the worst colors in the history of mankind. It’s a constant reminder of what happens in a bathroom: number one and number two. Eww, so not cute.
“Liv, sweetie, come on,” Mom calls from the porch. I will never understand her need to call me by my middle name instead of my first. I, unlike some people, love my first name. But that’s my mother for you.
I wince. “Keep your voice down. Someone might hear you.” Doesn’t she have any clue how dangerous it is for me to even be on the enemies’ turf like this? Apparently not, because now she’s making her way across the lawn and back to her car to retrieve me as if I’m five, not seventeen. I dodge her before she reaches me, rush up to the house, and slip inside.
Don’t get me wrong, Brian’s cool, but this move destroyed everything I’ve worked my butt off for. My captain position on the swim team … gone. My chance to take the softball team to state and to stroke that huge silver trophy? Yeah, not happening now. Thanks, Fate, Cupid, and whoever else is responsible for ruining my senior year. And my life, while we’re at it.
Fear and anger washes over me as I make my way through the foyer. Brian steps out of the room on the left and wraps his lanky arms around me. I cringe. Why do adults try to hug you at all the wrong moments in life? I don’t want, nor do I need, a hug. “I’m so happy you’re here.” I bite back my own retort to those words. “I know this is a big change for you.”
Big change? That’s the understatement of the year. Next Monday my mother will be getting a phone call saying I was brutally murdered. And the sad part is the person who committed the crime will probably get a parade thrown in their honor. Yes, the school rivalry is not what you’d call a typical one: toss some toilet paper in the trees, egg a house, or throw some tomatoes at all the cars in the parking lots. It’s busting lips, putting people in the hospital, and really laying it all out. Think Ohio State vs. Michigan and you’ve totally got it. Tipping over cars, setting couches on fire on your neighbors’ lawn. Yeah, we’re that kind of crazy rivalry.
Brian clears his throat. “Well, Skylar, this is going to be great, you’ll see.” It’s almost cute how he makes it sound like we’re going to the North Pole to see Santa. I stopped believing in things like the Tooth Fairy, Easter Bunny, and all that jazz when I was six. So I’m not putting all my eggs in his basket. “Your mother has been trying to get you to come down and see the place, but I guess our schedules clashed.” More like I wasn’t stupid enough to set foot on this side of town with just my mother as backup.
The door behind me pops open. My mother carries in two large bags, her eyes narrowing at me and then down at the bags with the are-you-going-to-help look. I glare right back. I refuse to be any part of this monstrosity.
“Hey, honey.” Brian moves around me and plants one right on my mother. He takes the bags from her and she smiles. “I was just telling Skylar how great it is to have the two of you here.”
Silence prods us for a moment. Brian shuffles past me with the bags and says, “How about a tour, Skylar?”
Can this nightmare finally end? I don’t say this in front of my mother, I’ve already made her agitated enough on the car ride down here.
Brian leads us into the large room off to the left. Sage walls with white trim are before me. “This is the living room,” he announces. I want to tell him I think Martha Stewart broke into his house and puked her taste all over this room. Fake plants adorn the corners of the entryways and vintage lamps rest on the end tables. I can feel myself cringing at the thought that the bedroom I’m supposed to stay in probably looks something like this room. Just replace the couch and coffee table with a bed. And if that’s the case, I’m sleeping in my car.
The slam of a door pulls the attention of everyone in the room. “That’s probably Caleb,” Brian says then turns to the hallway. “Go ahead and show her the rest of the house, Erin, I’ll be right back.”
The elusive Caleb. He saw our old house as much as I saw Brian’s before now … which was never. My curiosity pulls at me to go see who this Caleb guy is when my mother nudges me. “What do you think so far? I helped Brian redecorate this room.”

Posted by Natalie Decker at 4:00 AM